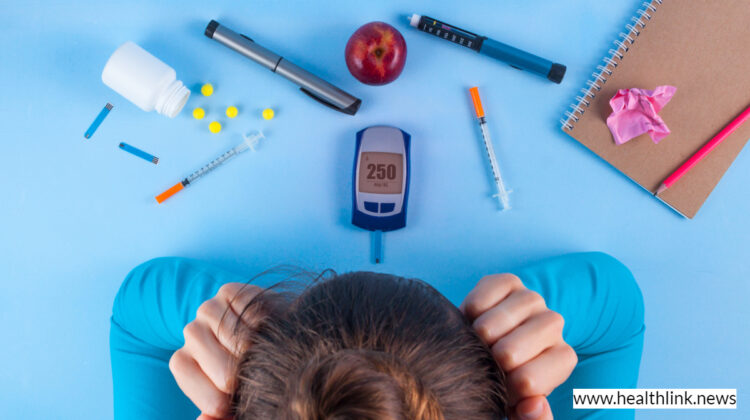 Diabetes is a chronic condition caused by the body’s inability to appropriately utilize blood sugar (glucose). Although the exact source of this defect is unknown, genetic, and environmental factors are likely to play a role. Obesity and high cholesterol are two risk factors for diabetes. The next sections go through some specific causes.

Type 1 diabetes is mostly caused by this. Insulin-producing cells that have been injured or killed stop producing insulin. Insulin is required to transport blood sugar into cells all over the body. Because of the insulin shortage, there is too much sugar in the blood and not enough energy in the cells.

This is unique to those with type 2 diabetes. It occurs when the pancreas produces insulin normally, but the body is unable to transport glucose into the cells for sustenance. To overcome the body’s resistance, the pancreas will produce more insulin initially. The cells eventually “wear out.” The body then slows insulin production, resulting in an excess of glucose in the blood. Prediabetes is the term for this condition. Prediabetes is defined as having a blood sugar level that is greater than normal but not high enough to be diagnosed with diabetes. Because there are no obvious symptoms, the person may be unaware unless checked. As insulin production decreases and resistance rises, type 2 diabetes develops.

Genetics has a part in determining your likelihood of developing diabetes. The significance of genetics in the development of diabetes is not entirely understood by researchers. According to the American Diabetes Association, having a parent or sibling with diabetes increases your chances of obtaining it yourself.

Despite the lack of clear evidence, several ethnic groups have a greater risk of diabetes. This is true for the following:

Cystic fibrosis and hemochromatosis are two genetic disorders that can damage the pancreas, increasing the risk of diabetes. Single gene mutations cause monogenic types of diabetes. Monogenic diabetes is uncommon, accounting for just 1 to 5% of all diabetes cases detected in children and adolescents.

What factors contribute to gestational diabetes?

Gestational diabetes, a type of diabetes that occurs during pregnancy, is thought to be caused by hormonal changes as well as genetic and lifestyle factors.

Extra weight is associated with gestational diabetes, just as it is with type 2 diabetes. Insulin resistance may already be present in pregnant women who are overweight or obese. Excessive weight gain during pregnancy could also be a concern.

What else could lead to diabetes?

Diabetes can also be caused by genetic abnormalities, other diseases, pancreas injury, and certain drugs.

Mutations in DNA (Deoxyribonucleic acid) Mutations or alterations in a single gene produce monogenic diabetes. These mutations are frequently passed down through families, although they can also occur on their own. Most of these gene abnormalities result in diabetes by impairing the pancreas’ ability to produce insulin. Neonatal diabetes and young-onset diabetes are the two most common kinds of monogenic diabetes (MODY). Diabetes develops in the first six months of life. MODY is mostly diagnosed during youth or early adulthood, however, it can also be diagnosed later in life.

Cystic fibrosis NIH external link causes thick mucus to build up in the pancreas, causing scarring. This scarring might make it difficult for the pancreas to produce adequate insulin.

Hemochromatosis is a condition in which the body stores too much iron. Iron can build up in the pancreas and other organs if the condition is not treated.

The pancreas may be damaged or removed

Pancreatitis, pancreatic cancer, and trauma can all disrupt or impair beta cells’ ability to create insulin, resulting in diabetes. Diabetes will develop if the injured pancreas is removed due to the lack of beta cells.

Medicines can sometimes injure beta cells or cause insulin to function incorrectly. These consist of

Consult your doctor if you have any concerns about the negative effects of any of these medications.

Your chance of acquiring type 2 diabetes rises as you get older, according to the National Institute of Diabetes and Digestive and Kidney Diseases. After 45, your risk increases significantly. Type 2 diabetes, on the other hand, is becoming more common in children, adolescents, and young adults. Reduced exercise, loss of muscle mass, and weight gain are all possible causes as you become older. By the age of 30, most people with type 1 diabetes have been diagnosed.

Insulin resistance can be caused by excess body fat. Inflammation caused by fatty tissue can contribute to insulin resistance. However, many obese persons do not get diabetes, and additional research into the link between obesity and diabetes is needed.

Muscle tissue responds to insulin better after exercise. Therefore regular aerobic and resistance training can help you reduce your diabetes risk. Consult your doctor about a safe fitness program for you.

Certain hormonal disorders, though uncommon, can contribute to diabetes. Insulin resistance can be caused by the following conditions:

The actual cause of type 1 diabetes is unknown to researchers.

According to the Centers for Disease Control and Prevention (CDC), it is assumed to be an autoimmune reaction in which the body assaults the cells in the pancreas that create insulin by mistake. However, scientists are baffled as to why this occurs.

According to the American Diabetes Association, certain persons are genetically prone to developing diabetes (ADA). Others may contract it because of environmental factors such as nutrition. Viruses may also be involved. A combination of these variables might sometimes set off the illness.

Your pancreas (the organ behind your stomach) releases insulin to help your body store and utilize sugar from the food you eat while you are healthy. When one or both of the following events occur, diabetes develops:

People with type 2 diabetes, unlike those with type 1, produce insulin. However, the insulin produced by their pancreas is insufficient, or their bodies are unable to identify and utilize the insulin. (This is what doctors term insulin resistance.)

Glucose (sugar) cannot enter your cells when there is insufficient insulin or when insulin is not utilized properly. Instead, it builds up in your bloodstream. This can harm a variety of body parts. Also, because cells are not getting enough glucose, they do not function properly.

Type 1 diabetes has no known cure. It necessitates ongoing disease management. However, with regular monitoring and medication adherence, you may be able to avoid more serious illness problems. Type 2 diabetes can often be successfully treated or even reversed if you work closely with your doctor and make good lifestyle changes. If you have gestational diabetes, it should go away once your baby is born. You are, however, more likely to develop type 2 diabetes later in life.

What Do You Need to Know About Diabetes Type1?

Gestational Diabetes: Everything You Need to Know About it

All About Symptoms of Diabetes