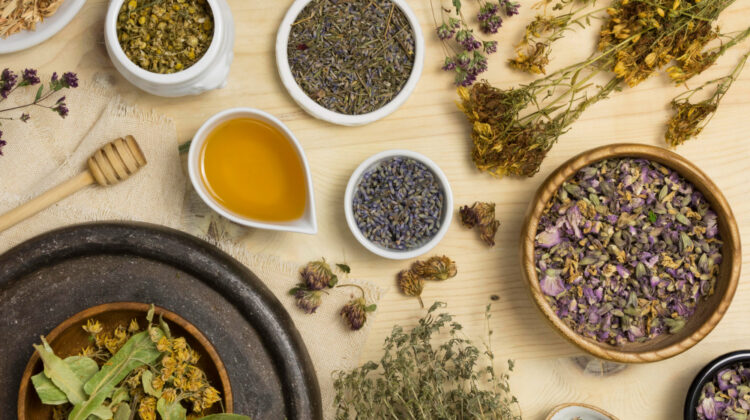 Herbs have been used since the earliest times to promote well-being, maintain health, and treat illness. People around the world increasingly rely on herbal remedies for a wide range of health concerns. Scientific investigation has confirmed several medicinal properties of herbs from traditional use. Herbs have been found to influence all parts of the human body, including the cardiovascular system, digestive tract, liver, and brain.

Herbal medicines are becoming more popular, yet many people do not know how to use them safely. Herbal medicines can be unsafe if taken along with prescription or over-the-counter medicines. Children, pregnant women, and people who have heart disease or high blood pressure should consult a health care provider before using herbal medicine.

Herbal medicines are natural products made with plant materials. They have not been thoroughly tested like drugs to find out how they work or if they are safe. Herbal medicines can affect the way other medicines work, and some herbal medicines may cause harm when taken with certain medicines.

Herbal medicine offers a natural alternative to conventional pharmaceuticals – and a potential combination of herbs has been shown to deliver positive results with less risk of harmful side effects. Some natural remedies may be more affordable and accessible than conventional medicines, and many people prefer using them because they align with their health ideologies.

Several herbal medicines have been used for centuries, with each providing benefits specific to certain ailments. From providing relief from pain to improving sleep, these natural remedies have been used for a variety of health conditions. The effective herbs in today’s time are Ginkgo Biloba, Echinacea, St. John’s wort, Elderberry, and Ginseng.

Echinacea is a flowering plant that has been used in Native American remedies for centuries. Many parts of the plant are beneficial, but the roots are the most powerful.

Herbal remedies such as Echinacea, or coneflower, have been used for hundreds of years to boost the body’s defense systems and fight off sickness. This member of the daisy family, also known as Rudbeckia, Echinacea boosts the immune system and shortens the length of common colds. And while it is mostly used in teas and extracts, there are other ways to enjoy it.

Echinacea is available in cream or liquid form, as capsules, tablets, or tinctures. It can be used to treat the symptoms of colds, flu, skin infections, burns, abscesses, wounds, blisters, toothaches, sore throats, and stomach upsets.

Echinacea is considered an immune system booster, which means it may help your body fight off colds. It can also be effective at reducing inflammation in your mouth, throat, ears, nose, lungs, bladder, and intestines. This herb is often used to treat recurring infections like the cold sores many people get around their mouths. Echinacea is a traditional home remedy used to soothe the throat, stop a slight cough, or help relieve pain. Echinacea can be used to stimulate the immune system and fight off illness.

Echinacea is typically taken to treat the symptoms of a cold. Results show that it may also reduce your chance of becoming sick due to a cold, but it does not shorten the length of an actual cold. Some people have mild reactions to using Echinacea, such as stomach pain, and skin rash.

Ginseng is a natural adaptive with anti-inflammatory and antioxidant properties which promote overall health and enhance energy levels.

Ginseng, also known as the “plant of immortality,” has been used in Traditional Chinese Medicine for centuries. There are several varieties of ginseng, but the two most popular are Asian and American. The more stimulating variety is Asian, while the more relaxing variety is American.

Ginseng root has been used in Chinese herbalism for more than 5,000 years, and its popularity continues to grow in the United States. The ginseng plant is a perennial herb with roots that are dried and sold as a food supplement, which can stimulate or relax according to the variety being used.

Asian ginseng root is used in traditional medicine for the treatment of several ailments, including anemia, depression, fatigue, and weakness. The small red berries are commonly used in teas and soups.

While researchers continue to look at ginseng’s effects on diabetes and cancer, preliminary studies suggest that it has a positive effect on your immune system. There is also some evidence that it may help to lower blood sugar levels, making it a potential treatment for diabetes, as well as an aid to weight loss. It also is a useful antioxidant.

Ginseng is an herb that has been used for years in traditional Chinese medicine. Today, new scientific studies are showing it may help boost energy, improve your memory, and even help fight cancer. Long-term results are not yet known, however, so consult with your physician before taking ginseng supplements.

Asian ginseng, a perennial herb, is used in traditional Chinese medicine to treat a variety of conditions, including low energy and impotence. It contains phytochemicals that may have antioxidant benefits.

Ginkgo biloba is a tree with a long history of use in Chinese medicine. Extracts of the plant have been used medicinally for thousands of years. It contains a variety of potent antioxidants that are thought to provide several benefits.

Ginseng Ginkgo biloba is an excellent source of flavonoids, a type of antioxidant that works to scavenge free radicals in the body. Free radicals are molecules that can damage cells and contribute to heart disease, cancer, and other conditions. Antioxidants such as flavonoids may appear to be beneficial for health and contribute to heart health by working to reverse oxidative stress and by helping to maintain normal blood pressure and keep the arteries clear.

Ginseng is adaptive, which means it helps your body adapt to environmental stresses. The leaves of the ginkgo tree are also edible and are sometimes used to make tea.

Ginkgo biloba is a tree native to China. It has been used in traditional medicine for thousands of years. The supplements are made from the dried leaves, leaf buds, and seeds of this tree, which are also called Ginkgo nuts.

Gins Ginkgo Biloba is an extract of the seeds of the ginkgo tree. The extract is sold as a dietary supplement. It is sometimes used for memory problems, anxiety, nerve pain, or poor blood flow to the brain.

There are many potentials uses for Ginkgo Biloba, including helping with anxiety, depression, asthma, heart failure, macular degeneration, headaches, insomnia, tinnitus, high cholesterol levels, constipation, hot flashes associated with menopause in post-menopausal women, muscle cramps in the legs due to peripheral neuropathy or other problems. Nevertheless, it should be avoided during pregnancy and lactation.

Elderberry is an ancient herbal medicine that treats a variety of ailments ranging from headaches and colds to constipation. This may come as a surprise to patients who have been diagnosed with other conditions, but it is important to remember that elderberry is not a cure-all. If you have a chronic medical condition, always speak with your physician before starting a new treatment plan. Elderberry is a traditional elderberry syrup that you can take as a cold, flu remedy, and treat symptoms associated with the common cold and flu. It comes in a convenient ready-to-drink package that takes the guesswork out of preparation.

Elderberry may have immune-boosting capabilities. Though more research is needed, it is thought to help treat the flu. Elderberry contains compounds that have been shown to have antioxidant, antimicrobial, and antiviral properties in test tube studies. Small human studies suggest that elderberry helps shorten the duration of flu infections. However, larger clinical trials are needed to determine if it is more effective than standard antiviral therapies. Elderberry is considered safe when consumed in moderate amounts or when taken short-term for up to six weeks.

St. John’s Wort is an herbal extract usually produced in tablet or capsule form. The extract has been used to heal wounds, aches, and pains, boost mood or remove anxiety.

For a special kind of calm, try the ancient herb Saint John’s Wort. Traditionally used for centuries to lift mood and lift spirits, its naturally calming properties have made SJW a favorite in natural sleep remedies. St. John’s wort is a flowering plant that has been used for years as an all-natural remedy for mild to moderate depression. SJW also relieves the symptoms of premenstrual syndromes, such as irritability and low energy, as well as reduces pain caused by nerve damage.

St. John’s Wort is a flowering plant that has been used to ease depression and anxiety. Several clinical trials have demonstrated that this herb—usually taken as a tea or tablet—is effective in treating mild-to-moderate depression, especially when “initial treatment is given in combination with standard antidepressants such as Prozac, Zoloft, and Lexapro.”

Many studies note that short-term use of SJW is as effective as some conventional antidepressants.  In addition, St. John’s wort can interfere with many prescription drugs for anxiety and other conditions. For that reason, it should not be taken if you are also taking any prescription medications, including those for diabetes and heart disease. St. John’s Wort also has anti-anxiety and antidepressant properties, making it a multi-use, everyday tonic to support your regular mood and stress levels. It is commonly used as a sleep aid and for menopausal symptoms and depression (when accompanied by the proper medication).