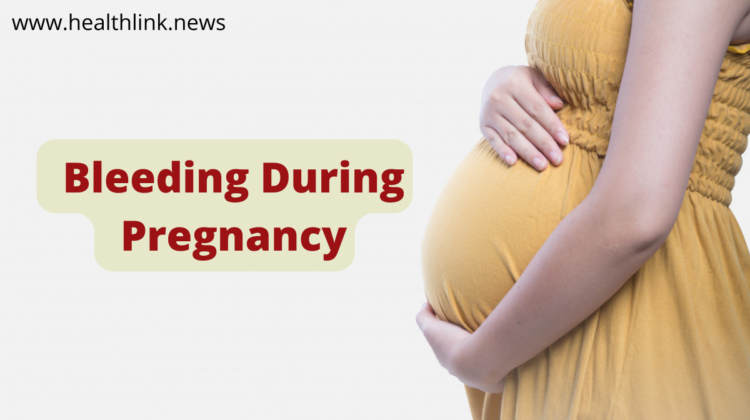 Are you bleeding during pregnancy?

You may bleed during pregnancy because of changes to your cervix. You can also have bleeding if there is an underlying condition or complication, like choriocarcinoma, gestational trophoblastic disease, or molar pregnancy.

If you are experiencing bleeding during pregnancy and are not sure what is causing it, it is a good idea to share your symptoms with your healthcare provider to get an expert opinion on what could be going on.

Spotting sometimes happens during pregnancy. If you notice a few drops of blood in your underwear and it does not fill up a panty liner, it is considered spotting. Spotting can sometimes be normal during your first trimester, but if you ever need to put on more than one panty liner because of the blood, it is bleeding. It is always best to call your healthcare provider to let them know about any spotting or bleeding.

Bleeding during pregnancy is common, especially during the first trimester, and usually, it is no cause for alarm. If you have been pregnant before, you may even find that you have more vaginal discharge during pregnancy. But you should always contact your health care provider if you experience vaginal bleeding, as it can sometimes be a sign of a serious problem, such as early miscarriage or ectopic pregnancy (a condition in which a fertilized egg implants outside of the uterus).

Bleeding during the first trimester of pregnancy can be caused by implantation bleeding, a history of previous miscarriages, or an Ectopic pregnancy. Treatment of vaginal bleeding depends on when you experience the bleeding and how severe it is.

Miscarriage– You may worry that a small amount of bleeding in early pregnancy means you are going to miscarry. If a heartbeat is seen on ultrasound, over 90% of women who experience first trimester bleeding will not miscarry. But if it does happen, know that it is typically not related to anything you did or did not do, and is mostly caused by a random genetic problem in the embryo.

Other symptoms include pain in your lower back or abdomen Cramps that are stronger than menstrual cramps Passing tissue or fluid from the vagina.

Implantation bleeding– If you are pregnant, you may experience spotting or bleeding at some point in your pregnancy. Some women mistake this bleeding for their period and do not realize they are pregnant. Bleeding can be a sign of implantation, particularly if it lasts for only 1 to 2 days. Implantation bleeding occurs about 10 to 14 days after fertilization and is usually lighter than your period. Implanted bleeding may consist of a few drops of blood tucked away among the cervical mucus; it is not like the usual menstrual flow found in your undies.

Ectopic pregnancy– Most women bleed at some point during their pregnancy, but it is important to know when vaginal bleeding may be a problem. The most serious cause of first-trimester bleeding is an ectopic pregnancy, which can rupture the fallopian tube and cause life-threatening internal bleeding. Other causes include miscarriage, molar pregnancy, and a condition called a subchorionic hematoma.

While there are several reasons for spotting during a healthy pregnancy, heavy bleeding could indicate an ectopic pregnancy, which is life-threatening to the mother. If you experience heavy bleeding with cramping or pain in the abdomen, seek medical care right away.

Molar pregnancy– Molar pregnancy is a rare condition that happens when an abnormal placenta develops, which can include growth inside the uterus instead of a baby. In rare cases, these growths can become cancerous and spread to other parts of the body. If you are bleeding in early pregnancy and have severe pain, contact your healthcare provider right away to confirm whether or not you have a molar pregnancy.

This is a warning sign of molar pregnancy. Serious, but not life-threatening, symptoms associated with molar pregnancy include severe nausea and vomiting, and rapid enlargement of the uterus. The abnormal cells of a molar pregnancy cannot develop into a baby. If you have any of these symptoms, get immediate medical help.

Additional causes include Pregnancy is thought of as a happy time, but not all pregnancies are problem-free. One such problem is bleeding. Bleeding in early pregnancy can be worrying, but it is not always an indication that something is seriously wrong.

Bleeding in the second or third trimester may be due to many causes. Conditions range from minor, such as vaginal irritation, to serious, such as preterm labor or placental abruption (when the placenta separates from the inner wall of the uterus).

Possibility of bleeding in late pregnancy include:

Placenta Previa– During a healthy, normal pregnancy, the placenta covers the lower part of the uterus; however, in placenta previa, the placenta lies low in the uterus and partially or completely covers the cervix. This condition is rare, occurring in only one in 200 pregnancies.

Vasa Previa– Vasa Previa is a rare condition that can occur during pregnancy. Your baby’s blood vessels in the umbilical cord or placenta cross the opening to your birth canal. If these blood vessels rupture, your baby may bleed severely and lose oxygen.

At first, there is no symptom other than bleeding. Once bleeding begins, other signs include abnormal fetal heart rate and excessive bleeding.

Uterine rupture is a life-threatening condition. Other symptoms are pain and tenderness in the abdomen. Call your health care provider or go to the emergency room if you have any of these symptoms.

Premature labor– Premature labor, also known as preterm labor is when your body starts to go into labor before you reach the 37-week mark of your pregnancy. However, if you are looking for normal birth, then waiting until you are 39 weeks is best.

An important indicator of premature labor is an abnormal, excessive, or early loss of the mucus plug that blocks the cervix during your pregnancy. Cervical bleeding could be a sign of vaginal infection, cervical trauma or being exposed to extreme stress. It could also indicate a miscarriage. Do not panic, but in any case, contact your doctor.

Other causes of bleeding in late pregnancy include cervical infections, injury to the cervix or vagina, polyps, and cancer.

What Precaution Do you take If You Have Abnormal Bleeding During Pregnancy?

Vaginal bleeding that occurs in the first trimester may be due to 3to the implantation of a fertilized egg into the lining of your uterus. Bleeding that occurs later in pregnancy may be due to other causes. When to call your doctor whenever you have any bleeding during pregnancy, contact your practitioner immediately and describe the nature of the blood (for example, pink, brown, or red; smooth or full of clots).

If you are experiencing abnormal vaginal bleeding during pregnancy, it is important to schedule an appointment with your doctor right away. During your appointment, your doctor will check you for signs of miscarriage, ectopic pregnancy, and molar pregnancy. If these are ruled out, your doctor might recommend an ultrasound to identify the underlying cause.

If you have any of the following symptoms, which could be signs of a miscarriage or other genuine problem that requires immediate medical attention, call 911 or go to the emergency room immediately:

You may experience mild bleeding (called spotting or implantation bleeding) early in your pregnancy. This can happen when the fertilized egg implants in your uterus. It is a little pink or brown discharge only when you wipe. It is very unlikely to be heavy like a normal period. If you see heavy bleeding with cramps or pain, and it gets heavier over time, contact your healthcare provider right away. This can be a sign of miscarriage or an ectopic pregnancy. Also call if you have fever or chills with the bleeding, as this could be a sign of infection.