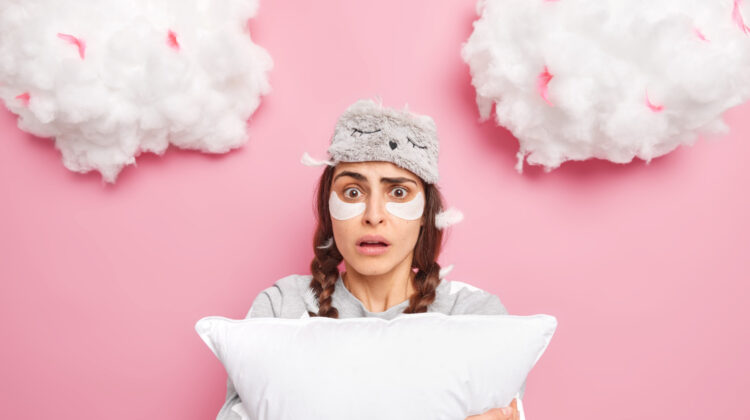 Eating or drinking before bed can lead to nightmares because nighttime eating is directly associated with the dream stage of sleep. Late-night eating may disturb your sleep in some cases. If you have a medical condition that wakes you up, you may be more likely to recall your dreams. For example, if you have gastroesophageal reflux (GERD (Gastroesophageal Reflux Disease), which is caused by lying down with a full stomach, then the movement of acid toward the esophagus could wake you up. Other medical conditions that might relate to an increased risk of nightmares include sleep apnea and restless leg syndrome.

The most common type of nightmare is a “sleep terror.” Sleep terrors are a result of an individual reacting to a stimulus during REM sleep and experiencing intense fear, terror, or other emotional reaction. In contrast to nightmares, which are vivid and often scary, sleep terrors are just unsettling and can include things like unusual noises, bloodcurdling screams, or even complete panic attacks. Nightmares are considered normal unless they occur frequently and impair social, occupational, and other functional areas of your life. This can be the result of medical conditions such as sleep apnea or periodic limb movement disorder. If this is the case, they may be referred to as Nightmare Disorder (or “repeated nightmares”).

What Causes Nightmares in Adults?

Nightmares can be frightening and cause you to wake up from a deep sleep filled with anxiety. Adults who have frequent nightmares may feel like they are always being chased, attacked, or fighting for their life. Nightmares are so common in adults that it is easy to assume that everyone goes through them at some point. However, a delicate balance between hormones and the brain chemistry you need during sleep is what creates these dreams. Sleep deprivation may be one of the factors contributing to nightmare disorders. Though this loop is unconfirmed, it is likely that nightmares are a result of a cycle in which sleep loss leads to more nightmares and then to more sleeplessness. It is also possible that cognitive impairment could lead to nightmares, as well as childhood trauma or difficult life situations such as divorce or illness. Nightmares in adults can be caused by certain sleep disorders. Chronic nightmares can be a distinct sleep disorder and may be due to a medical condition or underlying mental illness. Some individuals have recurring nightmares that do not have an external source. Individuals who have family members with chronic nightmares may also experience them themselves.

What Are the Health Effects of Nightmares in Adults?

Nightmares are common among adults, but the severity of their effects may not be fully understood. Nightmares can cause mental and emotional distress, as well as physical health problems. To help relieve these symptoms, it is important to consult a medical professional if you are experiencing frequent nightmares.

Treatments for Nightmares in Adults

Nightmares are a common symptom of many mental health disorders. If your nightmares are the result of a particular medication, you may be able to change your dosage or prescription to eliminate this unwanted side effect. For people whose nightmares are caused by conditions such as sleep apnea or restless legs syndrome, treating the underlying disorder may help alleviate symptoms. Behavioral changes have proven effective for 70% of adults who suffer from nightmares, including those caused by anxiety, depression, and PTSD (posttraumatic stress disorder). Imagery rehearsal treatment is a promising cognitive behavioral therapy for recurrent nightmares and nightmares caused by PTSD. The technique helps chronic sufferers change their nightmares by rehearsing how they would like them to transpire. In some cases, medications may be used with therapy to treat PTSD-related nightmares, though their efficacy has not been shown as clearly as imagery rehearsal treatment. If you are looking to get rid of nightmares and stress in your life, we believe a good night’s sleep is one of the biggest things you can do. Our most effective way of reducing stress is through sleep. Make sure you do not get drunk or intoxicated during the day and avoid caffeine and nicotine products, as they stay in your system for long periods of time.

It is true, food can affect some people’s dreams

A study has found that food may affect your dreams. “So far, reports would suggest that food can affect dreams and nightmares — at least some people say they are aware of such an effect. In a 2015 study, 17.8 percent of 400 undergraduate students reported that their dreams were affected by the food they ate or by eating late at night. Students reported the most blamed food was dairy. But they also pointed their fingers at sugary, spicy, starchy, meaty, and other foods. What they did not report was any dreams at all. It is possible that food could also induce other kinds of dreams, like ones involving sex, flying, falling, eating, or drinking.

Diary has long taken the rap for bad dreams — remember Scrooge blaming a “crumb of cheese” and other foods for his ghostly visitors? A study looking at the effect of cheese on dreams found that people dreamed more about celebrities when they ate cheddar instead of brie or feta. But no nightmares. Dreams are often reminders of what is in our minds at any given moment. Dreams can also contain bits and pieces of things from our memory, things that preoccupy our conscious thought, and any external stimulation that may be occurring during sleep. It is the perfect yin-yang of nightmares. You eat something that irritates digestion and causes more arousals during the night, and if you eat it thinking you will have a bad dream and it is near Halloween, then you may be more likely to have a nightmare.

NES is an eating disorder that occurs along with interrupted sleep (insomnia). People with NES may feel as if they do not have control over their urge to eat at night, and they may eat several times throughout the night. Untreated, NES can make it difficult for people to maintain a healthy weight. Also, NES increases the risk of health problems like diabetes and high blood pressure.

What are the symptoms of the night eating syndrome?

If you are having trouble sleeping, you may find that one of these three ways is throwing off your brain’s ability to sleep: food, exercise, or stress. Food is going to be the easiest thing to change if it is giving you issues-so if you feel like a late-night snack makes your dreams hard to fall asleep or nightmares keep you up, try cutting it out before bed. Exercise can also make things more difficult when it comes to sleeping, as moving around before bedtime will cause more energy use during sleep, which in turn makes getting up more difficult.