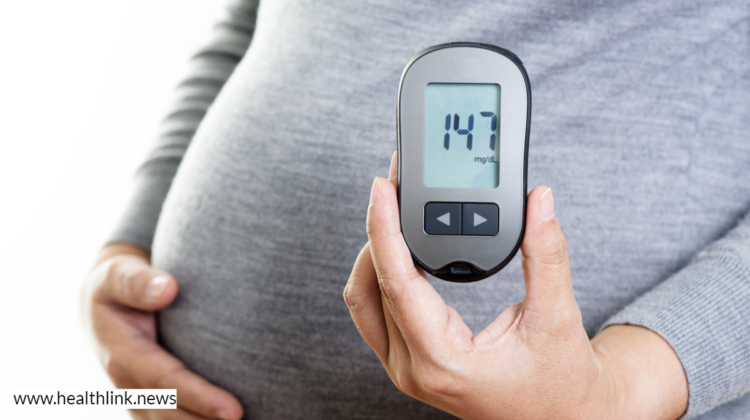 Gestational diabetes is a condition in which blood sugar levels are unusually high during pregnancy. Affected women do not have diabetes before becoming pregnant, and the majority of them return to normalcy after the baby is born. In subsequent pregnancies, the condition has a 30 to 70% risk of returning. Furthermore, almost half of women with gestational diabetes acquire type 2 diabetes within a few years of giving birth.

During the second trimester of pregnancy, gestational diabetes is frequently found. The condition is detected through standard screening at their obstetrician’s office because most affected women have no symptoms. If left untreated, gestational diabetes raises the risk of preeclampsia (high blood pressure caused by pregnancy) and premature labor of the baby.

Gestational diabetes causes babies to be huge (macrosomia), which might create problems during birth. Infants born to moms with gestational diabetes are more likely to experience dangerously low blood sugar levels shortly after birth. These people are more likely to acquire obesity, heart disease, and type 2 diabetes later in life. It also affects women who are pregnant but have never been diagnosed with diabetes.

Gestational diabetes is divided into two categories. Diet and exercise can help women with class A1 manage their condition. Those with A2 diabetes must use insulin or other drugs.

After you give delivery, gestational diabetes disappears. However, it has an impact on your baby’s health and increases your chances of developing type 2 diabetes later in life. You may take efforts to keep yourself and your child healthy.

Gestational diabetes is also known as:

Gestational diabetes affects up to 14 percent of all pregnancies in the United States. Over the last few decades, the prevalence of gestational diabetes has risen dramatically (a trend similar to the increase in obesity and type 2 diabetes).

The risk of gestational diabetes varies depending on ethnicity. Women of Native American, Asian, Hispanic, or African American ancestry are more likely than non-Hispanic white women to be diagnosed with the condition.

Women with gestational diabetes may have no symptoms or mistakenly attribute them to pregnancy. The majority of people find out they have it after a routine test.

You may have noticed:

What are the Causes?

Gestational diabetes has a variety of reasons. This disease is caused by a combination of genetic, health, and lifestyle variables, some of which are unknown.

Insulin has a key role in the development of gestational diabetes. Insulin is a hormone generated by the pancreas that regulates how much glucose (a form of sugar) is transferred from the bloodstream into cells for energy. When blood sugar levels are high (as they are after a meal), the pancreas releases insulin to transport the extra glucose into cells, lowering the amount of glucose in the blood. Insulin resistance, or the inability to respond to the effects of insulin, is a common side effect of pregnancy. This procedure ensures that the growing fetus has enough glucose to give energy. As insulin resistance progresses, more and more insulin is required to maintain normal blood sugar levels. As a result, the pancreas’ insulin-producing cells (known as beta cells) produce more insulin.

Most pregnant women do not acquire gestational diabetes because these cells can usually keep up with the body’s demand for insulin. In some women, however, pancreatic beta cells are unable to produce enough insulin to keep blood sugar levels within the usual range. The result is hyperglycemia (high blood sugar), which is a symptom of gestational diabetes.

The risk of developing gestational diabetes has been linked to common variants (polymorphisms) in multiple genes. These changes are prevalent enough that they can be found in both patients with and without gestational diabetes. A woman’s risk of having the condition is determined by the combination of these alterations. Although little is known about the genetics of gestational diabetes, research suggests that the genes linked to this type of diabetes are similar to those linked to type 2. These genes are involved in the development and function of pancreatic insulin-producing beta cells, as well as insulin resistance.

A woman’s total risk of developing gestational diabetes is likely influenced by genetic variants in combination with health and lifestyle variables. Having a previous pregnancy impacted by gestational diabetes, being older (especially over 35) during pregnancy, or having a baby who was large (over 9 pounds) at birth are all risk factors. Overweight or obesity, a hormonal imbalance is known as a polycystic ovarian syndrome (PCOS), and prediabetes are all risk factors for the disease (higher-than-normal blood sugar levels that do not reach the cut-off for diabetes). Many of the same factors that enhance the risk of type 2 diabetes also increase the risk of gestational diabetes.

In simple words, when we eat, our pancreas secretes insulin, a hormone that aids in the transport of glucose from your bloodstream to your cells, where it is used for energy.

Tests and Diagnosis for Gestational Diabetes

Gestational diabetes is most commonly diagnosed in the second part of pregnancy. Between weeks 24 and 28, or sooner if you’re at high risk, your doctor will check for it.

If your test results are satisfactory but you are at high risk, your doctor may test you once again later in your pregnancy to ensure you don’t have it.

If you do have gestational diabetes, you should get immediate treatment as soon as possible to ensure that you and your baby remain healthy throughout your pregnancy and delivery. Your doctor will ask you to:

Your doctors will help in keeping track of both your weight and the development of your baby. To maintain your blood sugar level under control, they may prescribe insulin or another medication.

Can it be inherited?

Gestational diabetes is a complicated condition with no obvious hereditary pattern. However, many people who are affected have at least one close relative who has this or another type of diabetes, such as a parent or sibling (most commonly type 2 diabetes).

Aim for a daily fiber intake of 20-35 grams. Whole-grain bread, cereals, or pasta; brown and wild rice; oatmeal; and fruits and veggies will all contribute to your success.

If you have gestational diabetes, you can exercise if your doctor advises so. Being physically active can help you regulate your blood sugar. Maintaining a healthy weight throughout pregnancy benefits your posture and might help you avoid common concerns like backaches and exhaustion.

As soon as possible, go active. On most days of the week, aim for 30 minutes of moderate activity. Running, walking, swimming, and biking are all excellent choices.