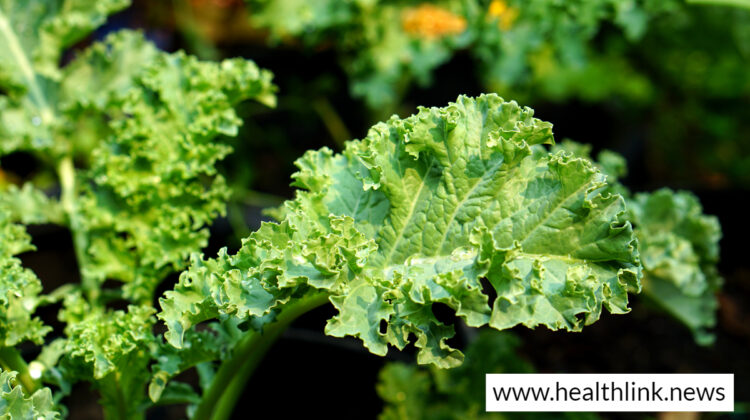 Kale is a highly nutritious, leafy, and dark green plant food that has been commonly found in most of Europe since Roman times and it is extremely rich in vitamins A, K, B6, and C, and contains minerals like calcium, potassium, copper, and manganese. Kale is known to be a very diabetes-friendly vegetable because one cup of raw kale contains only 33 calories and 7 grams of carbohydrate. It belongs to a group of cabbage families like cauliflower, broccoli, and collards. There are many different types of kale- some with green or purple leaves, while others have either a smooth or curly shape. The most common type of kale is called curly kale or Scot’s kale, which has green and curly leaves and a hard, fibrous stem.

Kale is a low-calorie diet and it is the most nutrient-dense food to have in breakfast or lunch. If you include kale in your everyday diet, you can surely make your body more nutrient-rich and healthy.

Vegetables are found to be rich in essential antioxidants, like flavonoids and polyphenols substances that help counteract oxidative damage by free radicals in the body (2 Source).

Antioxidants are believed to have excellent anti-aging properties and help fight various diseases, including cancer (3 Source).

Other important antioxidants, like the flavonoids- quercetin and kaempferol, which are found in large amounts in kale, are proved to strengthen our circulatory system, helps in blood pressure-lowering, are anti-inflammatory, anti-viral, anti-depressant, and have anti-cancer effects (4 Source).

3. The Rich source of Vitamin C

Apart from antioxidants, kale is packed with high amounts of Vitamin C, which regulates various important functions in the body cells, like the synthesis of collagen, the most abundant structural protein in the body- thus it helps promote growth in children or those having a deficiency in growth hormones.

Compared to vegetables like lemon, orange or green chili, kale is a richer source of vitamin C, containing about 4.5 times much as spinach. Kale is one of the world’s best sources of vitamin C. Around 67 grams of raw kale contains more vitamin C than a whole orange (5 Source).

Cholesterol is a waxy, fat-like substance that occurs naturally in your body. The two most important types of cholesterols are low-density lipoprotein (LDL) and high-density lipoprotein (HDL). LDL comprises 60–70% of total blood lipoproteins and is often referred to as “bad” cholesterol, as it has been linked to atherosclerosis or the buildup of plaque in arteries. HDL picks up excess cholesterol throughout your body and takes it back to your liver, where it can be used or excreted. It is often referred to as “good” cholesterol, as having cholesterol carried by HDL particles is associated with a decreased risk of heart disease (6 Source).

The liver turns cholesterol into bile acids, which are then released into the digestive system whenever you eat a fatty meal. Kale contains bile acid sequestrate, which can lower cholesterol levels. This might lead to a reduced risk of heart disease over time (7 Source).

One study found that drinking kale juice every day for 12 weeks (about 3 months) increased HDL (the “good”) cholesterol by 27% and lowered LDL levels by 10%, while also improving antioxidant status (8 Source).

According to one study, steaming kale dramatically increases the bile acid-binding effect. Steamed kale is 43% as potent as cholestyramine, a cholesterol-lowering drug that functions in a similar way (9 Source).

Vitamin K is an important nutrient that helps to regulate blood clotting, and “activates” the proteins that help in blood coagulation. Kale contains vitamin K that enhances the function of a popular anticoagulant protein, called Warfarin that helps in blood clotting. Kale is one of the world’s best-known sources of vitamin K. A cup of raw kale (67 grams) contains almost 7 times the recommended daily amount of vitamin K than any other vegetable.

Kale contains high amounts of vitamins, minerals, and antioxidants. It can effectively increase your body’s levels of important vitamins as it is a rich source of beta-carotene, an antioxidant that the body can turn foods into vitamin A (10 Source).

Kale is a good source of minerals that most people do not get enough from the regular diet they consume and their bodies remain deficient in those vital nutrients. It is a good plant food that houses decent amounts of calcium, a nutrient that is important for bone health and plays a role in all sorts of cellular functions, magnesium, an immensely important mineral that most people do not get enough from their regular diets. Eating plenty of magnesium may be protective against type 2 diabetes and heart disease (11 Source).

Potassium, a mineral that helps maintain electrical gradients in the body’s cells is found in good amounts in kale. It has been found that potassium helps to reduce blood pressure and lowers the risk of heart disease.

One advantage that kale has over leafy greens like spinach is that it is low in oxalate, a substance found in some plants that can prevent minerals from being absorbed (12 Source).

8. Contains Lutein and Zeaxanthin- The Powerful nutrients necessary for Eyes

Your eyesight reaches a poorer condition with aging. Some suffer from cataracts, while some form pigmentations. Kale contains several nutrients , like Vitamins A and C, that can help to prevent these conditions and maintain eye health.

Kale contains some more important elements- lutein, zeaxanthin, and antioxidants like carotenoids in large proportions that are highly recommended by experts for maintaining eye health and protecting eyes from several infections.   (13 Source).

Kale has very low levels of calories that will help you in weight loss. It has high water content and a very low energy density. Eating plenty of kale has been shown to help in weight loss in numerous studies (14 Source).

Kale also contains small amounts of protein and fiber that are the most important nutrients for losing weight.

Cancer nowadays has become one of the most dreaded diseases that result from the uncontrolled growth of cells. Studies have shown that cruciferous vegetables (including kale) may significantly lower the risk of several cancers (17 Source).

Kale is loaded with compounds, like indole-3-carbinol that is believed to stop the growth of cancer cells and prevent the spread of carcinogenic cells into the bloodstream and thus prevent cancer. (16 Source)

Sulforaphane, a substance that has been shown to help fight the formation of cancer at the molecular level, is found abundantly in kale.

How Will You Add Kale To Your Diet?

Kale is believed to be one of the healthiest and most nutrition-dense foods ever found. If you are planning for a weight loss or trying to get food with all the essential nutrients loaded into it, consider adding up kale to your platter.