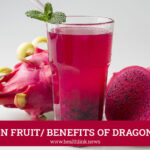 What is a Dragon Fruit? Dragon fruit is a fruit that is commonly found in tropical regions in the world. It is a fruit that can be found growing on the climbing plant that is cactus called ‘Hylocereus’. The plant's name was originated from the Greek word "Hyle," which means "woody," and the Latin word "cereus," which means "waxen." It is also known as Honolulu Queen. … END_OF_DOCUMENT_TOKEN_TO_BE_REPLACED