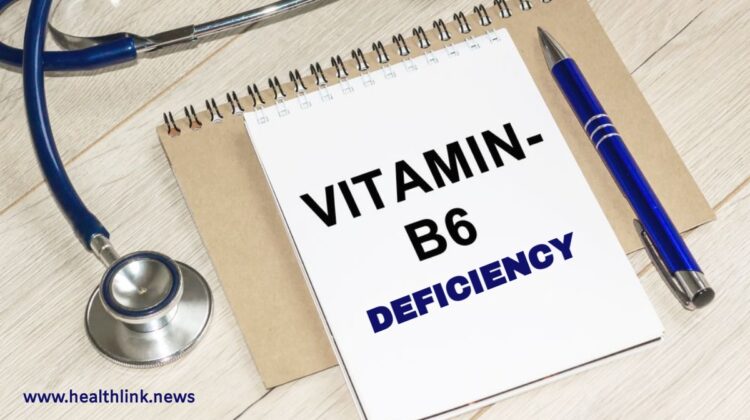 Vitamin B complex contains eight types of vitamins and vitamin B6 is one of them. It is still under research, although it was discovered in 1932.

Your diet can provide a sufficient amount of Vitamin B6. However, if you are deficient in other B complex vitamins like folate and Vitamin B12 then your chances of being B6 deficit gets higher.

People diagnosed with liver, kidney, digestive, or autoimmune diseases, as well as smokers, obese people, alcoholics, and pregnant women are more likely to get affected with vitamin B6 deficiency.

B6 is unique and involved in more than 150 enzyme reactions in your body that aid the body process the protein, carbs, and fat consumed by us. B6 is also responsible for the function of your nervous system and immune system.

B6 is also enriched with antioxidant and anti-inflammatory properties that reflect it plays a major role to aid in the prevention of chronic diseases like heart and cancer.

Healthlink.News will provide more in-depth insight into some signs and symptoms of vitamin B6 deficiency.

Vitamin is known for its capability to synthesize collagen that is the requirement of healthy skin and vitamin B6 deficiency can result in skin rashes. This issue can be controlled by consuming vitamin B6.

Usually, you can find a higher requirement of Vitamin B6 for some people affected with seborrheic dermatitis and a Vitamin B6 face cream can also improve your condition.

Do you also suffer from chapped lips that lead to sore lips?

Well, sore, red, swollen lips with cracks in the corners of your mouth can be a sign of vitamin B6 deficiency which is also known as cheilosis. This condition can lead to bleeding and infection-causing extreme pain and making you struggle with your daily routine like eating and talking.

You can heal your lips by simply consuming foods rich in vitamin B6 or a supplement that can satisfy the requirement.

Cracked and sore lips can also be caused by the deficiency of riboflavin, folate, iron, and other nutrients. Other factors that cause cheilosis are sunny, dry, or windy weather.

If you are having one of those days where your tongue gets swollen, inflamed, glossy-looking tongue due to the deficiency of vitamin B6. This condition is known as glossitis which is caused by the loss of papillae.

Sometimes we see small bumps on our tongue that’s papillae. Shortfalls of other nutrients, particularly folate and B12, might be responsible to contribute to this condition.

Glossitis can cause difficulty in chewing, swallowing, and talking. To avoid glossitis, you may need to consume all the vitamins mentioned above.

Vitamin B6 deficiency can have a major impact on your mood, sometimes promoting depression, anxiety, and irritability, and increased feelings of pain. Vitamin B6 is responsible for several neurotransmitters’ functions like serotonin and gamma-aminobutyric acid (GABA). Both these neurotransmitters are known for their efficiency in controlling anxiety, depression, and feelings of pain.

Several pieces of research are conducted based on many varieties of conditions to combat mood issues.

For instance, consuming vitamin B6 supplements helped about half of individuals with autism to lower the behavioral problems as b6 aids in producing neurotransmitters.

As per research, it is revealed consuming 50-80mg of B6 supplement aids in symptoms of premenstrual syndrome (PMS), such as moodiness, irritability, anxiety, and depression (1Trusted Source).

B6 produces serotonin that is excellent to lift your mood during your PMS. More research is conducted to evaluate the cause of PMS that may be due to vitamin and mineral deficiencies (2Trusted Source).

Our body’s health depends on our immune system that is a key to prevent infections, inflammation, and various cancers. One should keep their immune system healthy as any nutrient deficiencies, including B6, can disrupt the immune system.

B6 produces antibodies to fight against infections and vitamin B6 deficiency can lead to a decrease in the production of antibodies.

If you are vitamin B6 deficient then you may experience low production of white blood cells which includes T cells that are responsible to regulate immune function and keeps it working properly.

Moreover, a protein called interleukin-2 is produced by vitamin B6 in your body that aids to direct the actions of white blood cells.

People diagnosed with autoimmune disorders (immune system turns against itself) lead to an increase in the destruction of vitamin B6, which increases the requirement of the vitamin.

Lack of vitamin B6 can lead to tiredness and being sluggish. Vitamin B6 helps in producing hemoglobin, a protein present in the red blood cells of our body that plays a vital role to carry oxygen throughout your body.

Low hemoglobin can cause anemia as sometimes the supple supply of oxygen is not enough, making you feel tired and weak.

Besides feeling tired from anemia, B6 deficiency could also potentially contribute to tiredness due to its role in making the sleep-promoting hormone melatonin.

7. Tingling and Pain in Hands and Feet

Vitamin B6 deficiency can lead to nerve damage called peripheral neuropathy. Its characterization includes burning, shooting, and tingling pain in your arms, legs, hands, and feet. Some describe it as a “pins and needles” feeling.

Our body is controlled by our nerves so nerve damage can cause clumsiness, balance problems, and difficulty walking (3Trusted Source).

You can reverse nerve issues, B6 deficiency can be cured with adequate vitamin B6 intake. While, if you have a nerve problem due to toxicity then it will be more difficult to treat.

There are several factors behind seizures which also include vitamin B6 deficiency. Lack of B6 can cause the insufficient formation of the calming neurotransmitter GABA which might end up making your brain overstimulated.

Having a vitamin B6 deficiency can cause seizures in newborns. The first-ever seizures happened around the 1950s when babies were fed infant formula with insufficient vitamin B6.

Even adults have experienced seizures due to vitamin B6 deficiency, mostly found in cases like pregnancy, alcoholism, medication interactions, or liver disease.

Taking necessary measures to improve vitamin B6 deficiency is considered efficient in controlling or treating such seizures.

Well, homocysteine is a byproduct formed during protein digestion.

High levels of homocysteine levels can cause many health issues that include heart disease and stroke, as well as Alzheimer’s disease. Blood vessels and nerves can get damaged if homocysteine is elevated.

Not only this but your eating habits and physical activities are also responsible for diseases linked with high homocysteine and must be addressed.

Foods High in Vitamin B6

Our body is designed in a specific way, and it is not able to store a sufficient amount of vitamin B6. Therefore, to maintain a balance and avoiding B6 deficiency, one should consume it regularly.

You can find abundant vitamin B6 in plants and animal foods and fortified foods like breakfast cereals and nutrition bars.

The reference daily intake (RDI) for vitamin B6 for non-pregnant adults is 1.7 mg (5Trusted Source).

The below table gives more information on the supply of B6 present in top foods as well as serving size.

Notably, vitamin B6 present in animal food and fortified foods and supplement are better absorbent than plant sources.

Generally, plant food eaters or vegetarians need more supply of vitamin B6 to balance the vitamin intake required by the body.