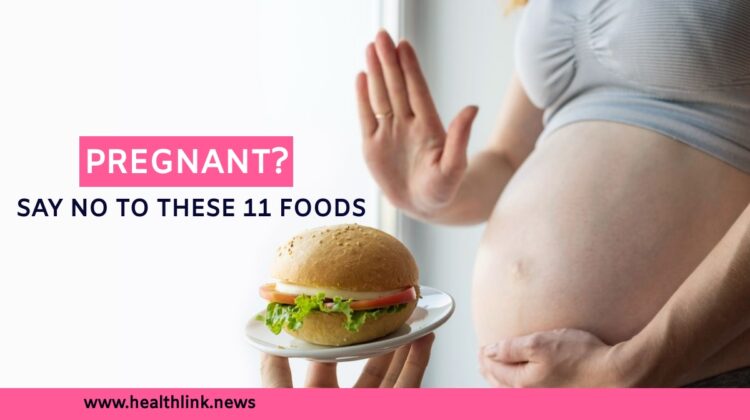 The moment a child is born, the mother is also born. A healthy mother and healthy baby complete a family. Staying healthy during pregnancy is equally necessary for the mother and for the baby too. You all become more conscious regards the intake of food during pregnancy, collecting information from different sources, family, and friends, and still confused about what food is not safe to consume during pregnancy.

Foods to avoid during pregnancy

Here is a list of what should a pregnant woman do not consume during those precious nine months.

The risk of toxoplasmosis increases, as undercooked or raw meat, should be avoided during pregnancy. As the risk factors of contamination with an infection, coliform bacteria and salmonella infection increase. Toxoplasmosis is an infection and one of the world’s most common parasites. Toxoplasmosis is an infection caused by a tiny parasite known as Toxoplasma gondii. The symptoms of the illness are mild and pregnant women won’t know if they had or not. But it can cause serious health issues for the baby. It could spread through infected meat to the mother, also get the parasite by Cat poo, eating unwashed fruits, vegetables, unpasteurized goats’ milk or cheese, and drinking contaminated water. Toxoplasmosis parasites cannot be transmitted from person to person except mother to baby during pregnancy. It usually spreads in later pregnancy, in early pregnancy can lead to miscarriage.

Most babies with toxoplasmosis develop symptoms after a few months of birth- damage to the eyes, hearing problems, and drain damage. Some might get infections to the eyes, an enlarged liver, and spleen, jaundice, and pneumonia.

The infection can harm your baby if the mother gets infected during pregnancy treatment is available for toxoplasmosis. Symptoms if you have toxoplasmosis such as-

Toxoplasmosis can be examined by a blood test commonly known as the TORCH test or ultrasound scan to find out the problem with the baby and your weak immune system. Toxoplasmosis is cured by antibiotics, which prevents the baby from catching the infection.

High content mercury can affect a baby’s developing nervous system and brain damage. This mercury in fish can lead to raise mercury level of mother and increase the risk for baby, passes through the placenta to developing baby. These types of high mercury avoided while pregnant or breastfeeding are rays, barramundi, gem-fish, ling, southern Bluefin tuna, swordfish, shark, king mackerel, and tilefish from the Gulf of Mexico. The main reason for high mercury is in water. The state of mercury changes to methylmercury because of microorganisms, which are absorbed by the tissues of fish through their gills. Methylmercury is the most hazardous, as mercury is very common in the environment and is found in three forms- inorganic, organic, and metallic. High levels of mercury will leave the human body over time in the urine and breast milk.

There are fish that contain lower levels of mercury include-

Undercooked eggs carry Salmonella bacteria organisms which can cause food poisoning. In pregnancy immune system temporarily weakens the immune system, particularly vulnerable to foodborne illness. Symptoms you get sick from Salmonella are likely to have a high fever, vomiting, dehydration, and diarrhea. In several cases, it causes preterm labor or even miscarriage. Should consume only when thoroughly cooked and pasteurized eggs, as the harmful bacteria are present in it. Commercially manufactured ice-creams, eggnog generally carry pasteurized eggs that don’t contain any risk of Salmonella bacteria. Pregnant women do not eat or taste these eggs, as they need to be cooked until the yolks and whites are firm. A pregnant woman should avoid- poached eggs, soft-boiled eggs, eggs over easy, eggs over medium.

If eggs are cooked and handled safely, then they are an excellent source of nutrition during pregnancy. It contains Protein, Choline, B Vitamins or Vitamin B7, Vitamin A, Vitamin D.

Fish and shellfish come in the category of seafood, which can be a great source of protein, iron, and zinc- a crucial nutrient for a baby’s growth and development. Many fish contains Omega-3 fatty acids includes (DHA) docosahexaenoic acid which helps in promoting the development of a baby’s brain. Some types of seafood contain high levels of mercury such as shark, swordfish, king mackerel, and tilefish. Special precautions should be taken by a pregnant woman as the fish contains high mercury, which can accumulate in the bloodstream over time could damage the baby’s developing brain and nervous system.

A pregnant woman should take some precautions such as:

Consumption of milk should by heating milk to a specific temperature, the process is widely used to kill harmful bacteria and diseases as listeriosis, typhoid fever, Q fever, brucellosis, tuberculosis, and diphtheria. The process is called Pasteurization. Raw milk isn’t sterilized it can carry dangerous germs includes- E.coli, Salmonella, and Toxoplasma. Listeria leads to food poisoning deaths and causes an infection called listeriosis.

Raw milk is a serious risk factor for a pregnant woman, the bacteria that is often found in raw milk can cause miscarriage, illness, or death of a newborn baby. Symptoms of foodborne illness include:

Do not eat the soft cheeses which are listed below unless they are made with pasteurized milk.

It is a stimulant, any amount of caffeine increases blood pressure and heart rate, which are not recommended during pregnancy. It increases the frequency of urination, as it reduced the body fluidity level and which can lead to dehydration. A normal human can handle a high amount of caffeine but a pregnant woman can’t feed to her body, the baby doesn’t have the enzymes to metabolize the caffeine.

Caffeine changes the sleep pattern which affects to baby’s sleep too and can keep both awake and change in movement pattern in the later stages of pregnancy. High intake of caffeine is associated with growth restriction, reduce birth weight, and preterm birth.

Caffeine is found in tea, soda, kola nuts, energy drinks, and chocolate, even sometimes helping in relieving headaches. If a pregnant woman consumes up to 200 mg of caffeine a day is safe for the baby. A cup of instant coffee contains 60mg of caffeine and a 100g bar of milk chocolate contains 20mg.

Thoroughly cooked sprouts to 165°F/75°C are safer to eat during pregnancy. Sprouts are reputedly known as healthy and nutritious but the raw sprouts create a problem as it contains bacteria, salmonella, E. coli, staph aureus, and listeria. They make their way into the sprout before the seeds even sprout, just like other veggies the bacteria is impossible to wash away. Sprouts contain a very high level of bacteria in the meantime can be served to your plate, pregnant women should avoid the intake of raw sprouts. Sometimes sprouts are added to the dishes at the end of cooking to retain the classic crunch in their dishes. They are cooked very lightly but to kill the bacteria they must reach a hot enough temperature to kill the bacteria. Some dishes contain lightly cooked sprouts- Pad Thai, pho, ramen and inside the toasted sandwich.

Eating sprouts during pregnancy can be considered healthy and incredibly nutritious to your meal but only when it is fully cooked. There are leafy sprouts like alfalfa and clover sprouts that contain high nutrition similar to the other greens. Provides some amount of protein, fiber, magnesium, and vitamin C.

Fresh fruits, vegetables, and juices are a very important part of your diet. They should be carefully selected and handled to prevent foodborne illness. Fruits, veggies should be washed properly, raw produces can become contaminated with harmful bacteria. Rinse raw fruits and veggies under running water before consuming them. Fruits which required to be peeled and cut are found bacteria on the outer rind or peel, such as melons and cantaloupe. Never use soap, detergents, and bleach solutions to wash the produces. Either use small veggies brush to remove dirt from the surface. Try to avoid the bruised areas and damaged parts of produces. As explained above about Toxoplasma, a parasite can be found on raw fruits and vegetables.

If we talk about the juicy produce, before peeling, cutting, and squeezing fruits and vegetables must be washed properly. The harmful bacteria on the outer layer can be transmitted to the inner part of the produce. Prefer to use pasteurized juice which is available in the refrigerated section of the stores.

Too much exposure to alcohol damage the development of the baby. In the first 3 months of pregnancy, there is a higher risk of miscarriage, premature birth, or might have low birthweight. Dangers of Alcohol during pregnancy increase these risk factors.

Complications seen in the young baby may include- cerebral palsy, premature delivery, pregnancy loss, or stillbirth. A pregnant woman should avoid any number of alcoholic beverages and should prefer a healthier diet.

Sometimes organ meats are referred to as superfoods, they are a dense source of vitamins and nutrients which are very good for health. Organ meat includes zinc, selenium, copper, Vitamin A, B12, D, E, K, phosphorus, and iron consuming too much is not recommended during pregnancy. There are harmful bacteria is in the intestines if the meat is not washed or cleaned properly. Several types of organ meats should be avoided by the pregnant woman- sweetbreads, kidneys, heart, liver, brain, and tripe.

Organ Meat is generally exposed to the bacteria during the process and storage time. The harmful germs and bacteria can be food poisoning infections like Salmonella.

Rich in vitamins, minerals, protein. The liver is considered a healthy and nutrient food but intake of a very high concentration of Vitamin A could be considered very dangerous for a pregnant woman.

While avoiding Vitamin A during pregnancy, it is important to get enough amount of Vitamin A. as it helps in bone development, supports the eyesight of the baby, and helps in maintaining your metabolism. The baby grows rapidly during the third trimester. You should take Vitamin A in the form of beta carotene and rich food in provitamin A. baby stores excess vitamin A, even eating a small portion of liver product could be toxic for the baby. Nutrition supplements such as retinol must be avoided, cod liver or shark oil contains liver traces within them. Vitamin A retinol- mostly found in animal products such as liver, eggs, milk, and cheese. There are alternative sources of vitamin A available in Turnip greens, spinach, pumpkin, sweet potatoes, and carrots.