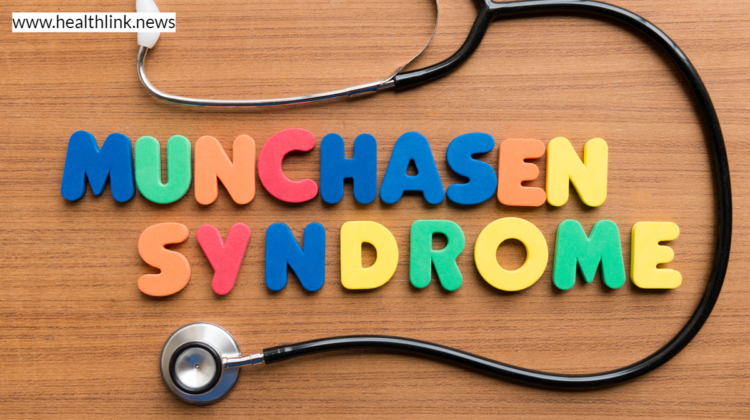 Munchausen syndrome is a mental disorder in which an adult acts as though he or she is sick despite the fact that he or she is not. It is a significant disorder since some people will injure themselves in order to produce disease symptoms. Symptoms include a strong desire to conduct medical tests or operations, a complicated medical history, a lack of clarity in symptoms, various scars on the body, and more.

Although Munchausen syndrome is most associated with a fictitious condition characterized by physical symptoms, the term is occasionally applied to all factitious disorders. Factitious disorder is a serious mental illness in which a person deceives people by pretending to be unwell, getting sick on purpose, or injuring themselves. Family members or caregivers can also cause factitious disorder by fraudulently portraying others, such as children, as ill, injured, or disabled.

Inventing medical difficulties for the purpose of getting out of work or winning a lawsuit is not the same as factitious disorder. Although people with factitious disorder are aware that they are the source of their symptoms or illnesses, they may not comprehend why they behave in the way they do or acknowledge that they have a problem.

It is difficult to diagnose and cure factitious disorders. However, medical, and psychological assistance are essential for averting significant injury and even death from self-harm, which is a common symptom of this disease.

Symptoms of the factitious disorder include imitating or fabricating disease or injury, as well as exaggerating symptoms or impairment in order to deceive others. Because people with this condition take tremendous measures to conceal their dishonesty, it can be difficult to recognize that their symptoms are truly signs of a major mental health problem. They continue to deceive even when they receive no tangible gain or reward, or when confronted with objective information that contradicts their assertions.

Signs and symptoms of a factitious disorder may include:

Munchausen syndrome’s specific cause is unknown, although experts are investigating the involvement of biological and psychological components in its development. Some ideas imply that a child’s history of abuse or neglect, as well as a history of repeated illnesses requiring hospitalization, may play a role in the syndrome’s development. Researchers are also looking at the possibility of a link to personality abnormalities, which are common in Munchausen syndrome patients.

How common do you think Munchausen syndrome is?

There are no solid statistics on the number of persons who suffer from Munchausen syndrome in the United States, however, it is thought to be a rare disorder. Because dishonesty is frequent with this condition, obtaining reliable numbers is challenging. Furthermore, patients with Munchausen syndrome frequently seek therapy from a variety of healthcare providers, which can lead to skewed numbers.

Men are more likely than women to get Munchausen syndrome. While it can afflict children, it is most common in young adults.

When someone fraudulently asserts that another person has physical or psychological signs or symptoms of sickness or produces harm or disease in another person with the objective of fooling others, this is known as factitious disorder imposed on another (formerly known as Munchausen syndrome by proxy).

People who suffer from this disorder portray another person as unwell, damaged, or incapable of functioning, implying that medical help is required. This usually involves a parent abusing their child. This type of maltreatment puts a youngster in grave danger of damage or needless medical treatment.

What are the ways in which Munchausen Syndrome is diagnosed?

Because of the dishonesty involved, diagnosing Munchausen syndrome is extremely difficult. Before a diagnosis of Munchausen syndrome may be made, doctors must rule out any physical or mental problems. If the doctor cannot find a physical cause for the symptoms, or if the pattern of physical symptoms described suggests that they are self-inflicted, the person will most likely be referred to a psychiatrist or psychologist, mental health professionals who are trained to diagnose and treat mental illnesses. To examine a person for Munchausen syndrome, psychiatrists and psychologists employ specifically devised interview and evaluation methods. The doctor’s diagnosis is based on the patient’s attitude and behavior, as well as the elimination of true physical or mental illness.

What Is the Treatment for Munchausen Syndrome?

Despite the fact that a person with Munchausen syndrome actively seeks therapy for the different ailments they manufacture, they are often unwilling to acknowledge the syndrome and seek treatment for it. This makes treating Munchausen syndrome patients difficult, and the prognosis for recovery is bleak.

When seeking treatment, the initial priority is to change the person’s behavior and limit their usage of medical resources. Treatment tries to address any underlying psychological issues that may be affecting the person’s behavior once this goal is attained. Another important purpose is to assist patients in avoiding potentially harmful and unneeded medical diagnostic or therapeutic procedures (such as operations), which are frequently sought from several doctors who may be unaware that physical symptoms are being feigned or caused by themselves.

How do people who have a factitious disorder deceive others into thinking they are sick?

Because people with factitious disorder become skilled at faking symptoms and diseases or inflicting real injuries on themselves, it can be difficult for health care providers and loved ones to tell whether or not illnesses are real.

People who suffer from the factitious disorder may fabricate symptoms or produce illnesses in a variety of ways, including:

Factors that are at risk

The factitious disorder can be triggered by a number of circumstances, including:

Although the factitious disorder is considered rare, the exact number of persons who suffer from it is unknown. To escape detection, some persons use fictitious identities, others visit a variety of hospitals and doctors, and still, others go unidentified, making it difficult to acquire a fair estimate.

People who suffer from the factitious disorder are willing to put their lives on the line in order to be labeled as unwell. They typically suffer from other mental illnesses as well. As a result, individuals may confront a variety of issues, including:

When should you see a doctor?

People with factitious disorder may be aware of the dangers of self-harm or the treatment they seek, but they lack control over their actions and are unlikely to seek help. Even when confronted with objective evidence such as a recording indicating they are the cause of their disease, individuals frequently deny it and refuse psychiatric treatment.

If you suspect a loved one is exaggerating or fabricating health problems, try having a friendly chat with them about your worries. Avoid being angry, judgmental, or confrontational. Instead, other than focusing on dysfunctional attitudes and actions, strive to promote and encourage more healthy, productive activities. Provide support and compassion, as well as, if possible, assistance in locating treatment.

If your loved one injures himself or attempts suicide, call emergency medical care immediately, or accompany him or her to the nearest emergency room if it is safe to do so.